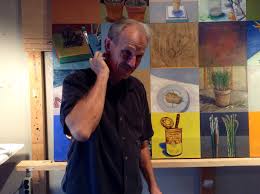 Douglas K. Morris was born on June 6, 1949 in Bradford, Pennsylvania and raised in Phoenix, Arizona. In 1964, at the age of 15, Douglas left Phoenix to hitchhike around the U.S. During that time, he made ends meet doing such odd jobs as sign painting. He studied life drawing at the School of Visual Arts in New York City. Morris has worked with the well-known portrait artist, Alex Fournier, and shared a studio with New York illustrator, Kenneth Duey. He illustrated the children’s books A New Look at the Pilgrims, and The Black Duck published in 1976 by Walker Publishing of New York. He also did book jackets for Houghton Mifflin in the same era.

My works are fragments of dreams, memories of the many beaches I’ve visited: Snapshots from the air looking for a place to land. They are abstract to define fantasy, which is a process of travel. Pure color defines simplicity. Images and shadows carry you to the next dream where shadows define a passage of time.

My recent works are about places I’d like to be, said Douglas, who has traveled extensively in the U.S. and Europe. He spent time sailing the Bahamas and Caribbean and has lived in England and New York.

Although most of Morris’ previous work has been realistic, his recent work merges abstraction with realism. I enjoy abstraction in realism. He provokes himself to work out all of the details to represent reality, solving all light and perspective problems to give his work a dimension beyond mere composition.

Morris has also exhibited at the famous International Book and Print Fair in Frankfurt, Germany.