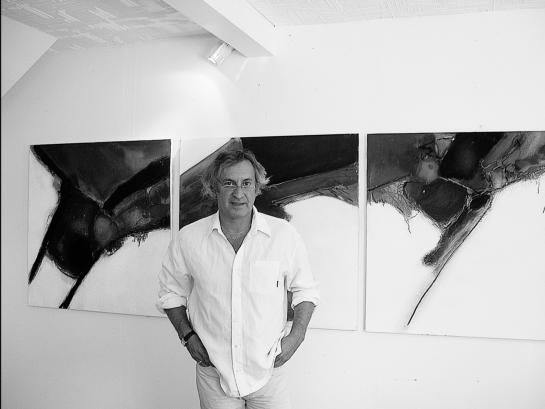 Erik Bersou was born in 1953 in Abidjan (Ivory Coast). Erik Bersou is at first a paintor until he meets with a Master-Etcher who teaches him his know-how and introduces him to a new way of expression: etching. He will make his artistic studies at the School of the Decorative Arts in Paris – etching department, where he graduates in 1978.
The young artist becomes an etching and drawing professor then opens a screenprint workshop in Alençon in 1988. In 1990, he trains as a typograph. Erik Bersou now works from over 20 years as an etcher, painter, typograph, illustrator and book publisher (Andrée Chedid, André Malartre, Louis Chedid, Jean-Pierre Crespel, etc…).
His interest for etching and his mastering of a major art allow him to reflect with intensity his emotions. Erik Bersou is influenced by passed emotional hurts readable in his etchings. His black shaded tones and his pure ocre colors offer sharp contrasts to his works with such intensity that it calls us for meditation. Erik Bersou builds his works around the etching process. His technics try to overcome the constraints of two dimensional supports, to work in depth in order to give effects to the material. To do so, he scratches the material or add to it pigments gathered from marble dust.
Erik Bersou’s work is ambitious and without concession to question spectators. It is meant to tell the untold, to go through the looking glass beyond realistic representations, to express another reality, the one that constitute our very own emotions. Between material and spirit, between taken and free space, Bersou writes down graffitis together with shade and light plays. Recently, the artist is trying another support : glass, his creations reveal a dramatic intensity where technic is entangled with spontaneity and movements.
In 2003, Eric Bersou settles down in the Manche, in Cérences, sharing his time between his art and local life. There, he sets up the Gravos Press, a small publishing house whose goal is to promote encounters between authors and visual artists around poetry. Gravos Press directed by Erik Bersou publishes poems and books.
For over 25 years now, Erik Bersou has participated to numerous exhibitions in France and abroad (Netherlands, Spain – French Institute in Sevilla -, Germany, Luxembourg, United-States, Israël, …). He is present at the major european etching events : SAGA Paris, Etching Fair in Frankfort, Stockholm, Cracovy, Linéart of Gand. His works are in private and public collections (Netherlands, Belgium, South Africa, Canada, France, FRAC of Basse-Normandy, FDAC of the Orne).